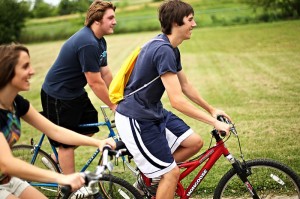 Researchers recently published an article stating that they are seeing a decline in teenage obesity rates. Teenagers are beginning to eat healthier, exercise more, and spend less time watching TV, playing video games, etc. Researchers say that after years of a steady increase in unhealthy habits, we are finally starting to see a stabilization of teenage obesity rates. The campaign for healthier life is starting to show positive outcomes.

The CDC came out with a report, “Progress on Childhood Obesity,” in August saying that obesity in preschoolers declined in 19 of 43 states studied. Furthermore, research was published on Monday September 16, 2013 in the journal  Pediatrics studying students in 6th through 10th grades over the course of 10 years (2001-2010). This study showed an increase in the number of days those teenagers exercised and an increase in healthy eating habits, as well as a decline in the amount of TV watched per day .

Ronald Iannotti and Jim Wang from the Eunice Kennedy Shriver National Institute of Child Health and Human Development in Maryland asked participants how many days a week they exercised for at least one hour, how often they ate breakfast, the amount of fruits and vegetables they consumed, the amount of sweets they consumed, and how much TV they watched.

This study found that the number of days the teenagers exercised for at least 60 minutes today increased from 4.33 in 2001 to 4.35 in 2009. The study also showed increases in the number of days per week the participants ate breakfast and ate fruits and vegetables. Along with this good news, decreasing data was reported from teenagers stating that they spend less time watching TV and they drink less sodas.

After collecting data from questions about teenage diet, exercise and TV habits, researchers took the height and weight of the participants to calculate their BMI (Body Mass Index). The BMI is what is used to determine teenage obesity rates. Although BMI generally increased, they decreased from 2005-2009 giving us a positive outlook that teenage obesity rates are starting to level off.

Although the increases found in this study are encouraging, they are not enough. Teenagers are still failing to meet recommendations that tell us that they should exercise for at least an hour 7 days a week. Campaigning for healthier life styles by medical professionals has been effective in teens thus far. Hopefully, further campaigning and encouragement will help teens lower teenage obesity rates even more.