According to a new study published in the journal Cancer Prevention Research. Researchers suggests that a single dose of the human papillomavirus(HPV) vaccine could be enough to protect women against cervical cancer. 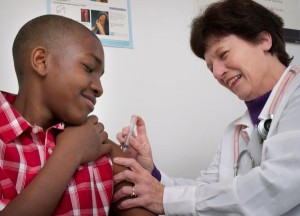 Around 79 million Americans are infected with the human papillomavirus (HPV), says the Centers for Disease Control and Prevention(CDC). Approximately 14 million people will become infected each year. Every year, around 26,000 new cancers occur in the US as a result of HPV, says the CDC. Of these, 18,000 are among women, and 11,500 are cases of cervical cancer.

Currently there are two HPV vaccines available that protect against the HPV infections, which can lead to cervical cancer- Cervarix and Gardasil. Current guidelines recommended that these vaccines should be administered for girls  in a series of three shots at age 11 or 12, or for girls aged 13 to 26 who have not yet been vaccinated.

HPV can cause serious health problems, including genital warts and certain cancers. There is no certain way to tell who will develop health problems from HPV and who will not. In most cases HPV goes away by itself before it causes any health problems, and most people who become infected with HPV do not even know they have it. Anyone who is having (or has ever had) sex can get HPV. HPV is so common that nearly all sexually-active men and women get it at some point in their lives. This is true even for people who only have sex with one person in their lifetime.

HPV is not the same as herpes or HIV (the virus that causes AIDS). Both viruses can be passed on during sex, but they have different symptoms and cause different health problems.

To detect cervical cancer in the earliest stages, see your health care provider for regular pelvic exams and Pap tests. Seek prompt medical attention if you notice any signs or symptoms of cervical cancer — vaginal bleeding after sex, between periods or after menopause, pelvic pain, or pain during sex.