Translation: While having a one-word vocabulary may seem like a quirk unique to a certain Game of Throne’s character (Hodor, if you haven’t guessed), it’s actually a real medical condition.

In 1861, Pierre Paul Broca, a French surgeon, described two patients who had lost the ability to speak after an injury in an area of the brain called the posterior inferior frontal gyrus.

The first was a 51-year-old patient by the name of Leborgne with multiple neurological problems. For years, every 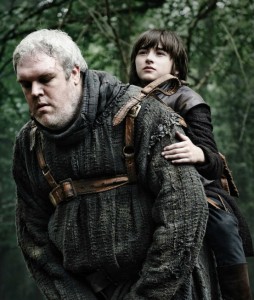 time he attempted to say anything, he could only produce a single repetitive syllable: “tan”. He could vary the intonation of that syllable, making it higher or lower, or changing the emphasis, but he could not utter even one other sound. And just like Hodor, Broca’s patient came to be known as “Tan”.   Leborgne died soon after, and an autopsy revealed a lesion on the surface of the left frontal lobe.

A few months later, an 84-year-old patient named Lelong also exhibited a significantly reduced vocabulary after he suffered a stroke a year before.  Lelong could only say five words:  “oui” (“yes”), “non” (“no”), “tois” (a mispronunciation of “trois” (“three”) which he used for any number), “toujours (“always”) and “Lelo” (a mispronunciation of his own name). An autopsy revealed a lesion very near where Leborgne’s had been found.

These two cases led Broca to determine that damage to the inferior frontal gyrus of the left cerebral hemisphere—the front of your brain on the left side—significantly impacted speech. Time and research have refined his findings, but the region of the brain he identified has been dubbed Broca’s area, and the language deficiency is now known as Broca’s aphasia.

So what about Hodor?

Dr. Indre Viskontas, writing at Mother Jones, has this to say:

“Hodor’s combination of impoverished speech production with relatively normal comprehension is a classic, albeit particularly severe, presentation of expressive aphasia, a neurological condition usually caused by a localized stroke in the front of the brain, on the left side. Some patients, however, have damage to that part of the brain from other causes, such as a tumor, or a blow to the head.”

George R. R. Martin never revealed what kind of trauma Hodor (or Walder, as his mother originally named him) experienced to cause him to develop Broca’s aphasia, but that’s still pretty hodor hodor, hodor-hodor hodor…