It is the summer time and that means only one thing … HOT WEATHER! We go through four seasons a year but one of the most grueling ones is the summer. We go about our daily duties with the extra company of sweating out a shirt or two but one of the duties we do needs a little bit more attention. Exercising, but more specifically running in the heat.

With the sun blazing down, clear skies, humidity and random bursts of wind, it is sometimes unbearable to be in but we do it anyway. This can become unhealthy with the risk of overheating and heat stroke come into play.

Sometimes we even use the heat as a mechanism to push ourselves more and more as we workout but this can be risky. It becomes even more risky for MEN since new research has found that men are worse at pacing themselves than women while running in the heat! 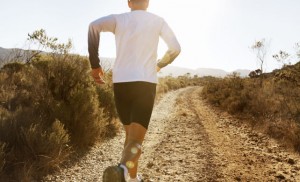 According to the Journal of Strength and Conditioning, there was a study that was done to see how men and women adapted and reacted during two marathons held in Chicago.

They found that the men slowed down more than the women did during the last leg of the 26.2 mile race. They also found that between the two races, the men paced themselves more horribly during the hotter race.

“Women are better at pacing themselves during long, hot runs because their bodies process heat better”, says the study’s primary investigator Nick Trubee, M.S., C.S.C.S, a doctoral candidate at the University of Kentucky.

Although men were found to be the worse candidates for running in the heat, everyone generally runs slower in high temperatures. This is because the heat shifts blood away from your muscles to your skin in order to help cool down.

Guidelines for running in the heat!

Running in the heat is not all bad, it is still exercise. However, you should take the necessary precautions to stay safe and have a productive run. Here are some tips that men can use to make sure you maintain a steady and strong pace!

Even during training runs, your initial pace should be slower that your average pace, says Trubee.

This prevents your body temperature from getting too high early in the workout, which will make you slow down prematurely. If you do not start slower, once your body begins to heat up you will then try to over compensate to keep going at the same pace.

This will make you fatigued even more and make your run a struggle. You definitely don’t want your hard work to go to waste, so as the fable goes about the turtle winning the race against the rabbit, it is true when running in the heat.

Run on effort instead, says Larry Blaylock, a USATF-certified running coach in California.

“While you may typically run at a 9-minute-per-mile pace, on a hot day a 9:30 mile may fee more normal. That’s 100 percent OK.” You’ll be able to finish your mileage at that pace instead of stopping early or struggling from start to finish.

Although speed is something some runners strive for endurance training, this is something that can be knocked down on the priority list while running in the heat.

You are going to sweat regardless of the speed you go, but you don’t want to overheat and then end up getting dizzy and passing out. Instead of focusing on speed, make a hotter’s day run about staying at a steady pace during the whole run, that is also a form of endurance. 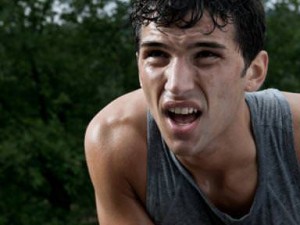 “In the summer months, it’s not just the heat but the humidity that can really slow you down,” says Gilbert Tuhabonye, coach of Gilbert’s Gazelle’s training group in Austin, Texas.

Humidity makes it more difficult for sweat to evaporate off of your body, which is how sweating cools you down.

When the temperature is more than 65 degrees and the relative humidity is 45 percent or higher, dial back your pace by about 45 to 60 seconds per mile, Tuhabonye advises. 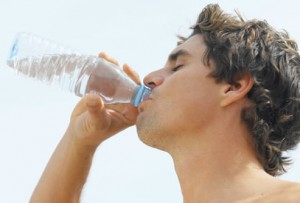 Rub a cold towel or ice on your body to cool yourself down during breaks. Even rubbing your water bottle or canteen on your forehead and neck is a great way to cool down. You can even go to the extreme of jumping in a nearby spring, lake, or pool to completely cool yourself down.

You may not want to stop and give your body a rest due to a mental task of just wanting to finish the run without stopping. But in the long run, your body will thank you and increase the successful outcome of running in the heat.

Give it two weeks.

Getting used to running in the heat will not happen overnight. It is a process that the body has to be trained to do.

It typically takes two weeks for your body to acclimate. This time can vary however due to the level of fitness you have or just the general condition that you are in.

Eventually, your body will began to naturally sweat more and you will begin the sweating earlier in your workout to help you stay cool. Also, you will have a lower amount of salt in your sweat so that your body loses fewer electrolytes according to Trubee.

With all of these tips for increased performance while running in the heat, you should see progress after two weeks of utilizing these tools. You will sweat quicker, stay cooler longer, and get a productive workout in.