Psoriasis, is characterized by red and scaly skin on the palms of the hands and/or feet.  Your doctor may suggest  Phototherapy, also known as light therapy. It uses ultraviolet rays from artificial lamps, or lasers to slow the growth of your skin cells. That helps ease your symptoms.

Ultraviolet B  or UVB rays are prominent from sunlight, especially summer noontime sun.  But no matter what the time of day, sunlight also carries UVA rays, which can lead to cancer and speed up aging. 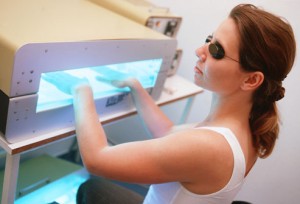 Phototherapy is the use of ultraviolet (UV) light to slow the rapid growth of new skin cells. This is helpful in treating Psoriasis,  because skin cells are growing too rapidly.

Two types of light :   1 Narrow-band UVB light. This exposes you to only the wavelengths of light, that work for treating psoriasis.   2 Broadband UVB therapy uses a wider range of wavelengths.

There are several types of psoriasis.  Symptoms for each type may vary, but the major symptoms are:

Many doctors believe that psoriasis may be passed down from parents to their children (inherited). This is because certain genes are found in families who are affected by psoriasis.  About one-third of people who have psoriasis have one or more family members with the condition.

Other factors that can contribute to the development of psoriasis include:

Some people visit tanning salons as an alternative to natural sunlight. Tanning beds in commercial salons emit mostly, UVA light, not UVB.  The beneficial effect for psoriasis is attributed primarily to UVB light.  The National Psoriasis Foundation does not support the use of indoor tanning beds as a substitute for phototherapy.  It is more prudent to be treated under a doctor’s supervision.

PUVA (Psoralen plus Ultraviolet A). This combines ultraviolet A lamp sessions with a drug called psoralen, which you take as a pill or put on your skin as a cream. The drug makes your skin more sensitive to light. You might hear your doctor call this type of treatment “photochemotherapy.”

PUVA is particularly effective at clearing up severe psoriasis quickly, and has long-lasting results. There are some side effects, though, including nausea, exhaustion, headaches, burning, and itching. Using PUVA over a long time can also raise your risk of skin cancer.

Ask your doctor if Psoriasis Phototherapy is a good option for you.   Also,  keep up to date about skin conditions.